I found this recipe on www.telegraph.co.uk and it sounds easy and does look brilliant!!!

Normally my mums friend Sue makes the Christmas pudding for dessert with the lucky sixpence etc and brandy butter etc… but this year i'm thinking maybe if i make it and see what goes in maybe i'll try it and love it! Not the brandy butter though as thats just yuk!

So as its Stir up Sunday tomorrow - the last sunday before advent it makes it Christmas Pudding day!!!

1. Get all the ingredients ready.
2. Grease a pudding bowl and throw in all your ingredients.
3. Stir it up! This is the part where you can make a wish, it mustn’t be a selfish one.
4. Tip the mixture out into the pudding bowl and pat down firmly with a wooden spoon.
5. Now you have to cover it first in baking paper and then in tin foil.  A brilliant trick to make perfect-sized circular lids: fold a square of baking paper (it needs to be a few inches bigger than the bowl itself) into quarters and then fold into a dart shape. Hold the pointed part of the dart in the centre of your pudding and trim the outside edge to follow the line of the bowl, a couple of inches clear of it. When you unfold it, you’ll have a circle, the right size. Pleat this in the middle and place over bowl.
6. Get your string. Sadly there isn’t a knack for this: wrap the string tightly around the bowl to secure the covers, then once it is secure take the string over the top several times to create a handle (essential for heaving the pudding out of the saucepan).
7. You now need a large saucepan and something to make sure the pudding basin doesn’t touch the bottom. A broken saucer will do, or an old grater, of if you’re a pro you’ll have a proper trivet. And that’s it (for the preparation stages, anyway). Now, when you’re ready, you just need to fill the saucepan three quarters with boiling water and simmer for 3 hours. Store in a cool cupboard or larder (don’t whatever you do remove the foil) until Christmas Day when it will need to steam for another 3 hours or so before serving.
If you’ve any left over after Christmas, which you probably won’t, Dan Lepard recommends frying it in butter and serving it with ice cream.
Ginger and Orange Christmas Pudding recipe
Written by Dan Lepard, exclusive to Sainsbury’s

Method
Whisk together the sugar, spices, orange extract, juice, stout and linseed until smooth.
Stir in the fruit, grated carrot, pecans and ginger then add the flour and mix well.
Pour in the melted spread, add the gluten-free breadcrumbs and stir well.
Grease the inside of a pudding basin with more Freefrom spread, then spoon in the mixture, patting it down as you go. Cut squares of non-stick baking paper and aluminum foil, large enough to easily cover the bowl, pleat them, and with the layers paper-side down, tie them tightly in place around the bowl with string.
Simmer in a boiler for three hours.
Store in a cool place. Do not break the seal or be tempted to remove the lid to look at the pudding. On Christmas day, simmer for another three hours before serving.
Happy Stir it up Sunday 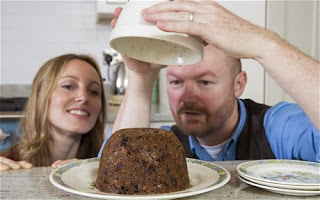