My name is Sallie I am a D mummy, this is a nickname for mums with a type 1 diabetic child.

It started a week after Levi's 3rd Birthday (Xmas day baby),when we were travelling up to the North East to visit Levi's Gran. Levi was normally quiet, easy going boy, almost a pensioner in a toddler’s body. We then noticed subtle changes in his personality, but thought the grumpiness and strops were part of the terrible 3's everybody warned us about. 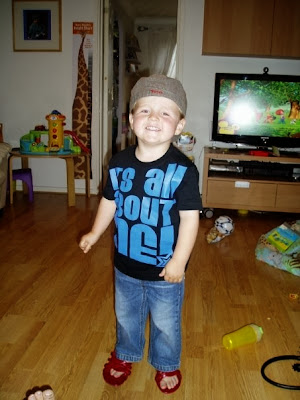 I guess the first alarm bells rang when he began to wet himself after being dry for a while; however after consulting with the health visitor, they advised us that this was normal and nothing to worry about.

One day, we went visiting the sights, and ended it with a fish and chip supper in the car overlooking Souter Lighthouse. We bought 2 adult portions of fish and chips, of which Levi and I were to share one of the portions. In amazement, I can honestly say I have never seen a small person eat so much, ashe ate the whole adult portion and was still complaining he was hungry and thirsty. I commented that after the Xmas break, I would speak to the health visitor again to advise her of the situation. On the way home we took a detour to our friends in Spalding, but again we noticed that Levi started being stroppy, and noticed he had drank quite a few beakers of water. The drive home was a nightmare, a 2hr drive with 13 toilet stops, I convinced myself he must have a water infection so instead of the health visitor, I would take him to the doctor.

I will never forget the 13th January 2009, when I took my tired stroppy child in to see one of the GP’s. I explained that he was tired, stroppy, suffering a personality change, wetting himself / soaking the bed overnight and had gained a massive appetite. The response from the GP was rather demeaning, as he scoffed 'what are you saying, he has diabetes?' As you can imagine I was shocked and explained that he was the doctor, and I was making no diagnosis, I just knew from instinct he was not right.  My assumption was that he thought “he we go an over protective mother”, then he smirked and asked Levi to produce a urine sample. We found this experience traumatic enough, without the demeaning and dismissive attitude portrayed by the GP! We were then made to wait an hour with Levi, constantly begging for juice, frequent toilet trips and a few meltdowns. Once we were called back in to the GP’s office the attitude had changed, and once he had checked the urine sample he told me to go home, get my husband, and tomake our way to the children's ward where they would be expecting our arrival. Within an hour of arrival at the hospital,they had recognised that Levi's sugars were dangerously high and he required insulin, and through this was diagnosed with the auto immune condition Type 1 diabetes!

I can tell you the world stopped spinning, and the questions started “why was my child a diabetic”? “I thought only old people got that?” You then question everything you have done as a parent, I had fed him everything organic (as you would with the first), done everything they had suggested but to no avail. After those plethoras of emotions, the fear set in and all you see in the media are the worst case scenarios - kidney failure, amputated limbs etc.

Type 1 diabetes is also known as juvenile, early-onset or insulin-dependent diabetes. It usually first develops in children or young adults. In the UK, about 1 in 300 people develop type 1 diabetes at some stage during their lifetime.

Whilst at hospital, we were introduce to an A team which included a paediatric diabetic specialist, a diabetic specialist nurses and a clinical psychologist. These people hand held us through the darkest days, and they instructed us on how to inject our child 4-5 times a day, and carb count his meals.

To explain, it's not just as simple as needing insulin for the food you eat for our growing child, it has been proven thatinsulin is not so effective when you have viruses, growth hormones, weather extremes, stress, excitement, bad dreams, exercise and so many other anomalies, you can imagine thateveryday becomes a challenge. If Levi's blood goes to low he will be affected by Hypoglycaemia. This symptom can happen suddenly when blood sugars drop below the natural level. It is usually mild, and can be treated quickly and easily by eating or drinking a small amount of glucose-rich food. If left untreated, hypoglycaemia can get worse and cause confusion, clumsiness, or fainting. Severe hypoglycaemia can lead to seizures, coma or even death in some instances.

If blood sugars are too high, he becomes Hyperglycaemia– This happens due to Type 1 diabetics are unable to produce insulin, and there is the constant danger of rising blood glucose levels, especially after meals. Over an extended period (years), if you suffer consistently fromhyperglycaemia, you are prone to the dangers that come with the disease, which are nerve, optical and organ damage. All these nasty side-effects (blindness, heart disease, amputation of limbs, etc) are all a result of long term hyperglycaemia. Onthe more immediate front, if someone is suffering from extreme hyperglycaemia, over shorter period, they are very likely to contract Ketoacidosis, which can in itself have very serious complications, and can be life threatening in some instances.

Taking all this into consideration, everyday has become achallenge; however Levi is truly amazing and takes it all in his stride. We have to analyse situations and take in to accounthis behavioural traits, as his blood sugars could be affecting his personality before taking any action to correct. People say I don't know how you do it, but I am a mum and its just another job Levi's pancreas does not work and until Levi can manage or my wish a cure comes along I am happy to be his pancreas. 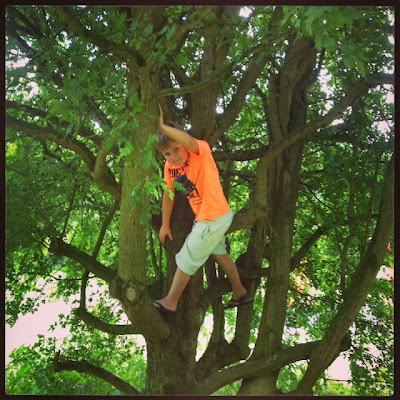 The test for Type 1 diabetes is simple, all it takes is a finger prick that could put someone’s mind at rest and could also save a life.


The most common signs to look out for are the 4Ts: Tiredness, thirst, thin and toilet. If you or a child you know are feeling constantly tired, even after rest, then this could be a sign of Type 1 diabetes. Having an unquenchable thirst, frequently going to the toilet and losing weight in a short period of time are also signs to look out for.
These four symptoms are the ones that really stood out for me in the weeks running up to Levi's diagnosis, but at the time I never knew this auto immune condition existed. An in depth specialist understanding of diabetes is not necessary, but knowing the 4T’s is all it takes. If you recognise any of these signs in yourself or a child, then go to your doctor and insist on a test for Type 1 diabetes.
BEING TYPE 1 AWARE SAVES LIVES.
Sallie x 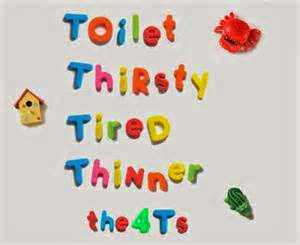